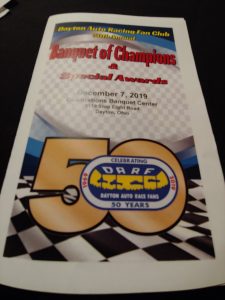 Cory Hensley, a 2014 graduate of Shenandoah HS, has distinguished himself both as the basketball voice of Shenandoah as well as in the auto racing world.
For the last 3 years, Cory has announced the race for the Vores Compact Touring Series (VCTS) at The Short Track U.S. Nationals at Bristol Motor Speedway and will announce again there next year.

Saturday November 30th, at the VCTS  Awards Banquet, Cory received a surprise from the owner, drivers, crews, and officials…. a special trophy that they had made just for him along with a microphone Christmas ornament to show their support and appreciation for all that he does for them and the series.